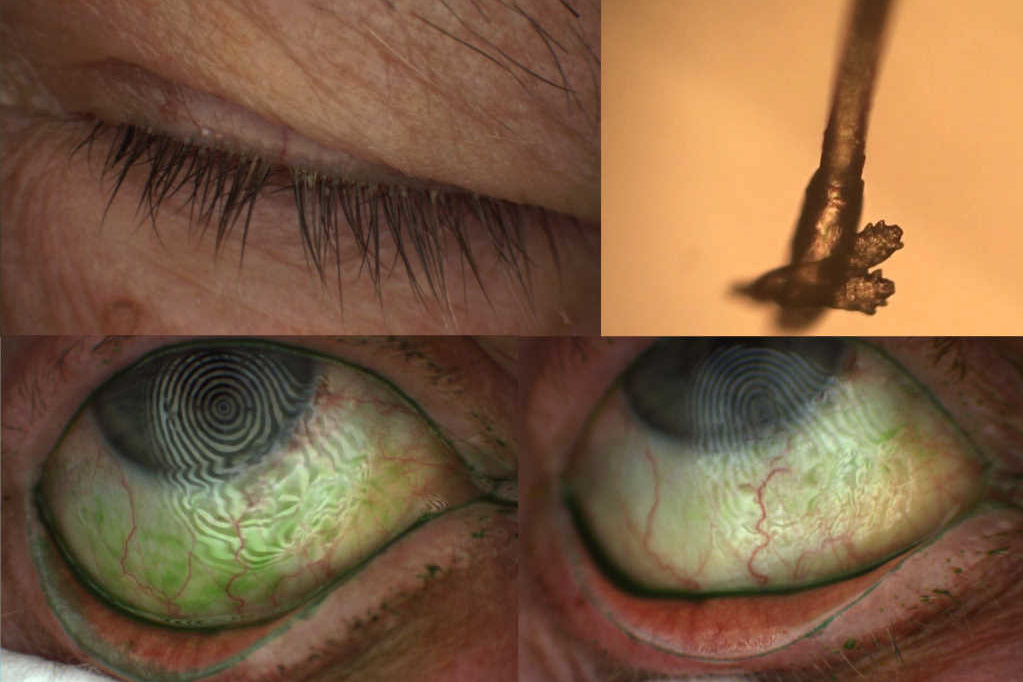 A participant with blepharitis and dry eye disease. A) Cylindrical dandruff at the base of the lashes B) Demodex visible by light microscopy following lash epilation C-D) epitheliopathy at baseline (C) and after three months of nightly manuka honey microemulsion treatment

Blepharitis is an epidemic – defined as inflammation affecting the eyelashes, eyelids and the ocular surface, it is widely recognised as one of the most common ocular conditions. Reports from US primary eye care providers show that blepharitis is commonly seen in clinical practice, in over 40% of patients¹, and similar prevalence rates are observed in New Zealand². It presents with symptoms such as lid margin itching and irritation, foreign-body sensation, ocular surface discomfort, epiphora, conjunctival hyperemia and visual symptoms such as light sensitivity and blurred vision when it affects the cornea. While it is a multifactorial disease, infection and inflammation are considered primary contributors, with increased bacterial load and parasitic infection often at play. Despite its prevalence, successful treatment of blepharitis can often be difficult. The current treatment typically consists of antimicrobial and anti-inflammatory eye drops, eye ointments and even orally prescribed medication.

Demodex mites were first identified in patients with blepharitis in the 19th century by Henle and Simon³ and recognition of a stable association between the two has since become well-established⁴. Despite the common association, however, ocular demodecosis remains a clinically underdiagnosed condition that relies on direct observation of the parasite with microscopic evaluation of follicles (Fig. A) or epilated lashes (Fig. B). Accompanying features such as collarettes, lid margin hyperaemia, irritation, fragile lashes and madarosis, may be the observation of cylindrical dandruff at the base of the eyelash, which is considered pathognomonic of Demodex infestation (Fig. A). Failure to diagnose Demodex as the underlying cause of blepharitis can result in the recommendation of non-effective treatments, as the mites fail to respond to conventional lid hygiene. To date, management strategies for Demodex blepharitis have included antibiotics, antihelminthics, and more recently, tea tree oil and associated terpinen-4-ol-containing products.

Honey is an ancient remedy known for its natural antimicrobial properties, and has been applied directly to cuts and scrapes, as well as taken orally to maintain internal health and prevent stomach upsets. Honey derived from the New Zealand manuka or tea tree – Leptospermum scoparium – demonstrates superior antibacterial properties to other honeys due to the presence of methylglyoxal (MGO), in concentrations ranging from 38 to 761mg/kg, which is up to 100-fold higher than that in conventional honeys⁵. Manuka honey (MH) has been shown to be beneficial in wound healing, including for leg ulcers, diabetic foot ulcers and maxillofacial wounds, with effectivity against Staphyloccocus species, MRSA – Methicillin-resistant Staphylococcus aureus, P. aeruginosa, H. pylori, and E. coli. Commercial manuka honey-based medical products include Medihoney, which was FDA approved in 2007 for wound-healing, skin ulcers and eczema, and Optimel, an ophthalmic product with reported benefits in dry eye and meibomian gland dysfunction⁶.

Over the last decade at the University of Auckland, a topical formulation combining cyclodextrin-complexed manuka honey with a microemulsion, has been developed in collaboration with Manuka Health NZ. In this product, freeze-dried honey is encased in an alpha-cyclodextrin with the purpose of increasing its stability, solubility, and bioactivity. After development and in vitro testing, initial safety and tolerability testing in an in vivo rabbit study showed promising results⁷. These were replicated in a human trial involving 25 healthy individuals and confirmed an absence of adverse effects on the tear film and ocular surface, as well as good subjective tolerability⁸. In parallel with this, an ex vivo study showed potential for manuka honey microemulsion (MHME) to be effective against Demodex⁹. In this study that compared raw honey, MHME, 100% tea tree oil and 50% tea tree oil (current in-office clinical standard), the MHME was observed to perform with equivalent acaricidal efficacy to 50% tea tree oil.

The encouraging in vitro, ex vivo and in vivo pre-clinical study outcomes lent support for progressing to an efficacy trial of this novel MHME, to explore its potential benefits in managing blepharitis. To assess its clinical efficacy, a prospective, investigator-masked, randomised, paired-eye efficacy trial was designed and patients with clinical blepharitis were invited to participate. A total of 53 patients (aged 60±12 years; 60% female) consented to participate in the study, and applied MHME eye cream to the closed eyelids of one eye (according to the randomisation schedule). The cream was applied sparingly each night, before sleeping, over a course of three months. Visual acuity, symptoms, tear film and ocular surface signs were assessed at baseline, at one month, and at three months after treatment. Symptoms were assessed with the Symptom Assessment iN Dry Eye (SANDE) visual analogue questionnaire and the Standardised Patient Evaluation of Eye Dryness (SPEED) questionnaire. Tear film evaluations included non-invasive tear break up time (NIBUT), lipid layer grade (LLG) and tear meniscus height, measured using the Oculus Keratograph 5M, and ocular surface evaluation was performed by assessment of the corneal, conjunctival and lid wiper epithelia with the aid of fluorescein and lissamine green dyes.

After treatment with MHME, symptoms improved significantly, as measured by the SANDE and SPEED questionnaires, compared to the untreated eye. The quality of tears was evaluated by testing the non-invasive tear breakup time (NIBUT), which has become a standard diagnostic procedure in dry eye assessment. Patients suffering from dry eye associated with short NIBUT typically experience ocular fatigue and/or dryness, and can further report reduced vision due to the unstable tear film and often poor quality of the lipid layer. In our patients, we observed that the NIBUT increased significantly in the MHME-treated eye at three months, relative to that in the untreated eye (p < 0.05). Consistent with the improvement in tear film stability, the median lipid layer grade (LLG) showed a significant increase in the treated eye (p < 0.05), from a grade 2 to a grade 3 pattern, while no changes were observed in the untreated eye.

If, by improving the tear film lipid layer thickness and stability, the clinician can successfully break the vicious circle of dry eye disease, with which blepharitis is inextricably linked, then downstream benefits in other features such as ocular surface inflammation and ocular surface damage might be expected to occur. Such an improvement was observed to occur with lid wiper epitheliopathy in the current study (Fig. C, D). This form of epitheliopathy is believed to arise from increased friction between the palpebral lid and the eye surface, due to insufficient lubrication. Lid wiper epitheliopathy is observed clinically as vital dye staining of the portion of the upper and lower lid margins that makes direct contact with the globe¹º. In our study, we found a significant reduction in lid wiper epitheliopathy in the eyes treated with the MHME (p < 0.05), while no changes were observed in the untreated eye.

Although the multifactorial nature of blepharitis needs to be better understood, infection and inflammation are believed to play key roles in its pathogenesis and propagation. In addition to improving tear film stability and quality, and reducing signs of ocular surface damage, application of the MHME cream also demonstrated a clinically significant reduction in Demodex mite presence. The proportion of participants positive for Demodex mites, halved after nightly application of MHME for four weeks, while no difference was observed in control eyes, aligning with the previous in vitro findings of the group.

The authors gratefully acknowledge the staff and student members of the Ocular Surface Laboratory, past and present, who have been involved in this research over the last decade; especially Drs Isabella Cheung, Ally Xue and Michael Wang, and Grant Watters for their involvement in the recent efficacy trial. The authors appreciate the unrestricted grant support provided by Manuka Health NZ.

Dr Andrea Cruzat joined the Ocular Surface Lab as a research fellow in 2017 and returned to Chile to take up a clinical ophthalmology post in 2018.

Associate Professor Jennifer Craig is a therapeutically qualified academic optometrist in the Department of Ophthalmology. Her main research interests include dry eye and tear film dysfunction.